The United States Department of Agriculture (USDA) published proposed regulations to implement the National Bioengineered Food Disclosure Standard (NBFDS) on May 4, 2018 (see 83 Fed. Reg. 19860-19889). Enacted in 2016, NBFDS directs USDA’s Agricultural Marketing Service (AMS) to develop a national mandatory system for disclosing the presence of bio-engineered (BE) materials in food by July 2018. Significantly, the rule would preempt state and local laws on BE labeling requirements.

NBFDS requires food manufacturers and other entities that label foods for retail sale to disclose information about BE food and ingredients using one of three options: on-package text, a USDA-created symbol, or an electronic link. Prior to issuing proposed regulations, AMS requested responses to a list of 30 questions to obtain stakeholder input to facilitate the drafting of the mandatory BE disclosure requirements. Responses to the questions—which ranged from ones concerning terminology and definitions to ones on disclosures, exemptions, and compliance—were due by Aug. 25, 2017. USDA received more than 112,000 responses to its list questions.

The proposed regulations for the NBFDS define "bioengineering" as a food "(A) that contains genetic material that has been modified through in vitro recombinant deoxyribonucleic acid (DNA) techniques; and (B) for which the modification could not otherwise be obtained through conventional breeding or found in nature." USDA has asked for comments on this definition and its applicability to all foods, and especially whether processed foods that have had all of their DNA removed, which are derived from bioengineered foods, should be considered bioengineered due to the possibility that trace amounts of DNA may remain.

The proposed regulation also provides several exemptions to the BE labeling requirements. These include: food served in a restaurant, very small food manufacturers (defined as “any food manufacturer with annual receipts of less than $2,500,000”), and food certified under the USDA’s National Organic Program (NOP). The proposed regulations also exempt incidental additives from disclosure. According to the proposed rule, incidental additives are “present in food at an insignificant level and do not have any technical or functional effect in the food are exempt from certain labeling requirements under the FDCA [Food, Drug, and Cosmetic Act].”

For the symbol disclosure, AMS proposed three alternative sets of symbols (see illustration) that may be used for disclosure purposes instead of text or a digital link.

Comments on the proposed rule implementing the NBFDS are due by July 3, 2018.

This article is reprinted with the permission of Packaging Digest magazine. 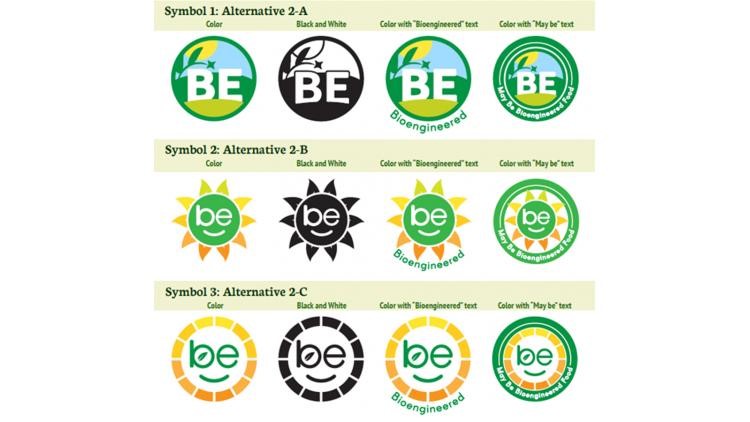